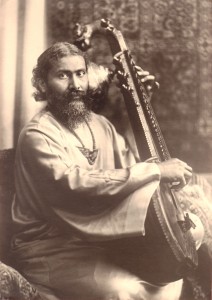 Oh Baroda thou art a blessed place,
Here first saw the world his radiant face.
He came to remind us our spark is divine,
His soul radiated the Sufi wine.

As an infant, a child, a lad, a boy,
The house Maula Baksh gave him so much joy.
And all in Baroda were impressed
And felt that this radiant youth was blest.
In all Baroda the vina he played
And all the hearts that heard, joyful were made.

In youth often came the royal command
All o’er India, great was the demand.
The comrades he chose were mystic and sage
And spoke wise words from a very young age.

Ever spurred on by his own Murshid’s words,
In the East and West the message was heard.
This divine Message was spread far and wide,
While helping thousands on every side,
Responding ever more to God’s very call,
Serving the Message he sacrificed all.
His whole life he gave up in Allah’s name,
God’s own vina our Murshid became.
With task fulfilled to India once more,
Land of ideals which he did so adore.
To house Maula Baksh he returned again,
But none was inside and great was the pain.

Risen above what he once valued most, 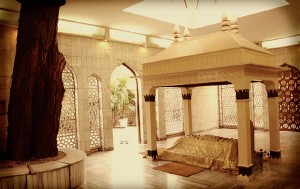 With victory won he gave up the ghost.
Released from the bonds of early ties,
The scent of unseen roses did arise.
Born in Baroda and in Delhi to rest,
Bow deeply grateful all those who are blessed.

Man sees what he sees; beyond it he cannot see.